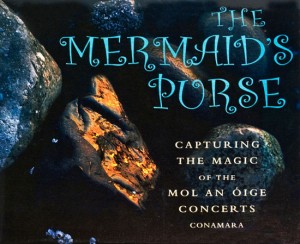 Available to buy from our online shop

Capturing the Magic of the Mol an Óige Concerts – 2011

For the last number of years CEECC has hosted the Mol an Óige Concerts, which provide a platform for up and coming young musicians throughout Conamara. These concerts have been held twice annually in the Church of Ireland Clifden during the winter and summer solstice and over the years, as well as providing great entertainment, the concerts have raised thousands of euros for local charities. The idea behind the concerts was to provide warm, encouraging spaces for expression and The Mermaid’s Purse gives a wonderful flavour of these magical solstice evenings. The CD also gives an accurate picture of the fine quality and variety of music being played by young people all over Conamara in 2011.

Click the play button below to hear a portion of each track.

The Hernons – Down the Broom, Gatehouse Maid & Concertina Reel (Reels)

Seamus Flaherty – Over the Mountain (Song)

The Hernons – The Linnets Choir & The Beautiful Goldfinch (Waltzes )