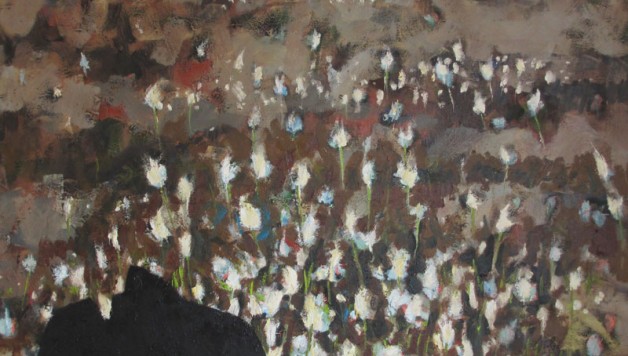 In ‘Síoda Móna/Bog Silk’, artist Seán Ó Flaithearta looks at historical and environmental issues surrounding the use and ownership of our natural resources.

He is interested in the relationship between people and bog lands and, in particular, the way the bog comes to life again after having its flora and fauna incinerated by wildfires. As the bog silk (bog cotton) blooms it provides a soft white covering for the blackened crust of the scorched ground. The gorse flowers again.  Sweet scents fill the air. The bog lights up with colour.

Beneath this white covering, however, lie traces left by the people who reclaimed these bad lands through hard work; the imprint of a slane, a discarded bicycle, cut turf that was never brought home, lonely paths leading to abandoned stone ruins.  These are the bad lands to which our ancestors were banished – out, west, to Hell or to Connaught.

But this land is now attracting the attention and greed of others. The people who laboured on the bog are now being driven out.  There’s no respect for the turf-cutter’s way of life. The wind that blows over the bog, the water that runs through it, and the turf are for sale. Do we buy and sell everything?  Will our bog lands survive or die?