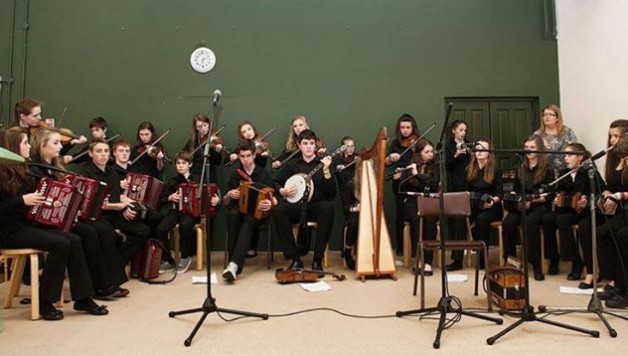 CEECC in conjunction with Forum Letterfrack and through the good offices of LEADER are working on an exciting music project at the moment. This project involves Conor Keane well known County Clare box player and composer, a host of young players and singers and dancers from Conamara and their music teachers – Mary Bergin the eminent whistle player; Marie Walsh multi-instrumentalist and established music teacher; Elizabeth and Yvonne Kane two of Ireland’s best known fiddlers and music teachers; Micheal O’Cuaig sean nós singer and teacher of sean nós.

Conor has composed music loosely titled ‘The Conamara Suite’. This is being taught to the young players and will be ready for performance in the New Year. To add to the excitement each music teacher is also composing a piece of music so in 2015 we will have a number of exciting concerts showcasing the best of Conamara’s young talent playing some brand new music.

These young musicians were greatly praised by President Michael D. Higgins when he opened Conamara Sea Week on October 17th. On the day the President and his wife Sabina gave the assembled players a standing ovation and were wildly enthusiastic in their support for the performance.

Thanks to everybody who came out in huge numbers to take part in Conamara Sea Week 2014. Special thanks for the lovely welcome given to President Michael D. Higgins and his wife Sabina. Thanks also to our sponsors and to all the individuals who made Conamara Sea Week 2014 a memorable occasion and an outstanding 30thbirthday celebration.

See you all on December 21st at our Mol an Oige Concert in the Church of Ireland Clifden for a great night of music. Gig starts at 8.00pm, admission is free but as usual we welcome contributions to St. Vincent de Paul. All monies collected on the night are spent locally.