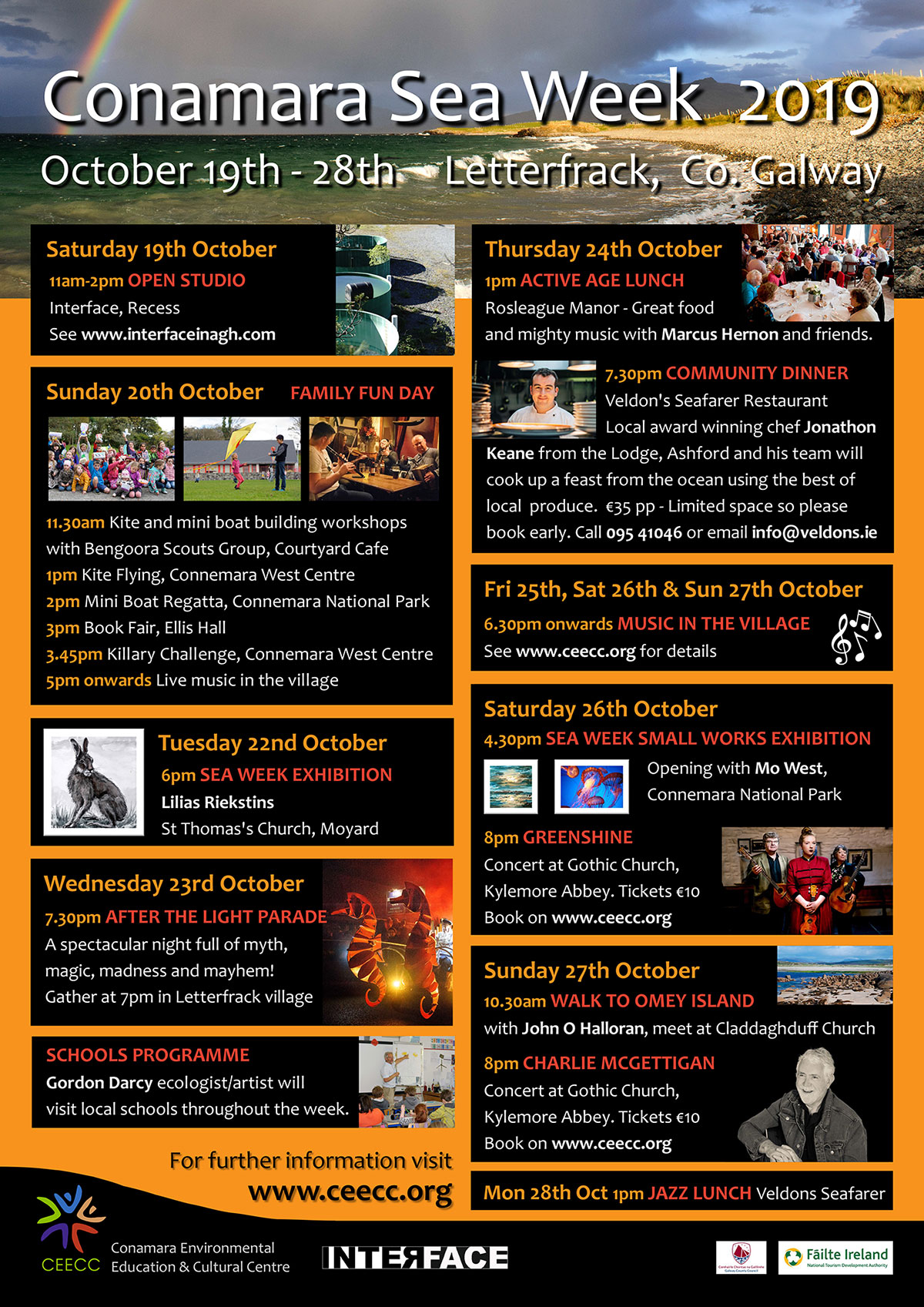 On Saturday 19th Conamara Sea week opens in style at Interface at Inagh – a new exciting arts facility founded by local artist Alannah Robbins featuring the work of Irish and International artists – some of who have been living in Conamara as part of an artist in residence programme.

This festival, which is on the go since 84 and is the winner of the premier arts award for Co. Galway is based around the Quaker village of Letterfrack, which is also the gateway to Connemara National Park who will also feature a number of events throughout the week.

The first weekend is focused on community with lots of events for family & children all wrapped up with great music in the local pubs.

Throughout the week there will be a schools programme organised by ecologist Gordan Darcy but undoubtedly the big event in the middle of the week is the After the Light night time Parade with all the 5 primary schools, GMIT Letterfrack, Youthreach, GRETB, the Crèches and the Brothers of Charity all taking part. The village goes dark and a light filled colourful parade goes through the village finishing up in the green space at the Connemara West Centre where giant fire Sculptures are lit. Making for a night of myth, magic and a hint of madness.

And as always, thanks to CW who provide tea & goodies for everybody in the Courtyard Cafe.

The bank holiday weekend will have great music, a brilliant art exhibition in the Connemara National Park and will end in style with a jazz lunch in the Seafarer at 1pm on the Monday featuring the amazing Paul O Drisscoll Jazz Trio.

MUSIC IN THE GOTHIC – Greenshine

KYLEMORE ABBEY ‘MUSIC IN THE GOTHIC’
with Greenshine
– dynamic trio from Cork. Recent album of the week on RTÉ Radio 1.

Their material straddles the boundaries of contemporary, folk and roots and includes many self-penned songs. Their fast picking and close harmonies are a treat to the ear.

MUSIC IN THE GOTHIC – Charlie McGettigan

KYLEMORE ABBEY ‘MUSIC IN THE GOTHIC’
with Charlie McGettigan
– Eurovision winner and one of Ireland’s most popular singers/ entertainers.

Charlie McGettigan started his musical career in the 1960s in various rock bands in Donegal. Moving to Dublin in 1968 he honed in on the thriving folk scene there at the time. In 1973, Charlie formed the highly successful group Jargon, which went on to win the prestigious Letterkenny Folk Festival, following in the footsteps of bands like Clannad and Pumpkinhead.

Charlie has worked with artists like Maura O’Connell and Eleanor Shanley who both recorded many of his songs including “Feet of a Dancer”, “A Bed for the Night” and “If Anything Happened to You”.

Charlie joined forces with Paul Harrington and Brendan Graham to win the 1994 Eurovision Song Contest for Ireland with “Rock n Roll Kids”. He has released many solo albums including “In Your Old Room”, “Family Matters” “ The man from 20” and “Stolen Moments” produced in Nashville by legendary producer Bil Vorndick.

Charlie’s songs have been recorded by many artists including De Danann, Mary and Frances Black, Ray Lynam, Daniel O’Donnell, Sandy Kelly and Hal Ketchum to name but a few.

These days Charlie tours both here in Ireland and abroad. He presents “The Saturday Connection” on Shannonside/Northern Sound Radio, a two hour programme where he previews live music and theatrical events, interviews guests from the world of arts and entertainment and plays an eclectic mix of music and song on CD.  As well as serving on the Board of IMRO, Charlie is also a member of the Board of The Dock Arts Centre in Carrick on Shannon, Co. Leitrim.

Charlie’s latest album “Tuesdays with Paul” is receiving great attention from the media and includes songs like “Dust if you must” and “When I was a kid”. 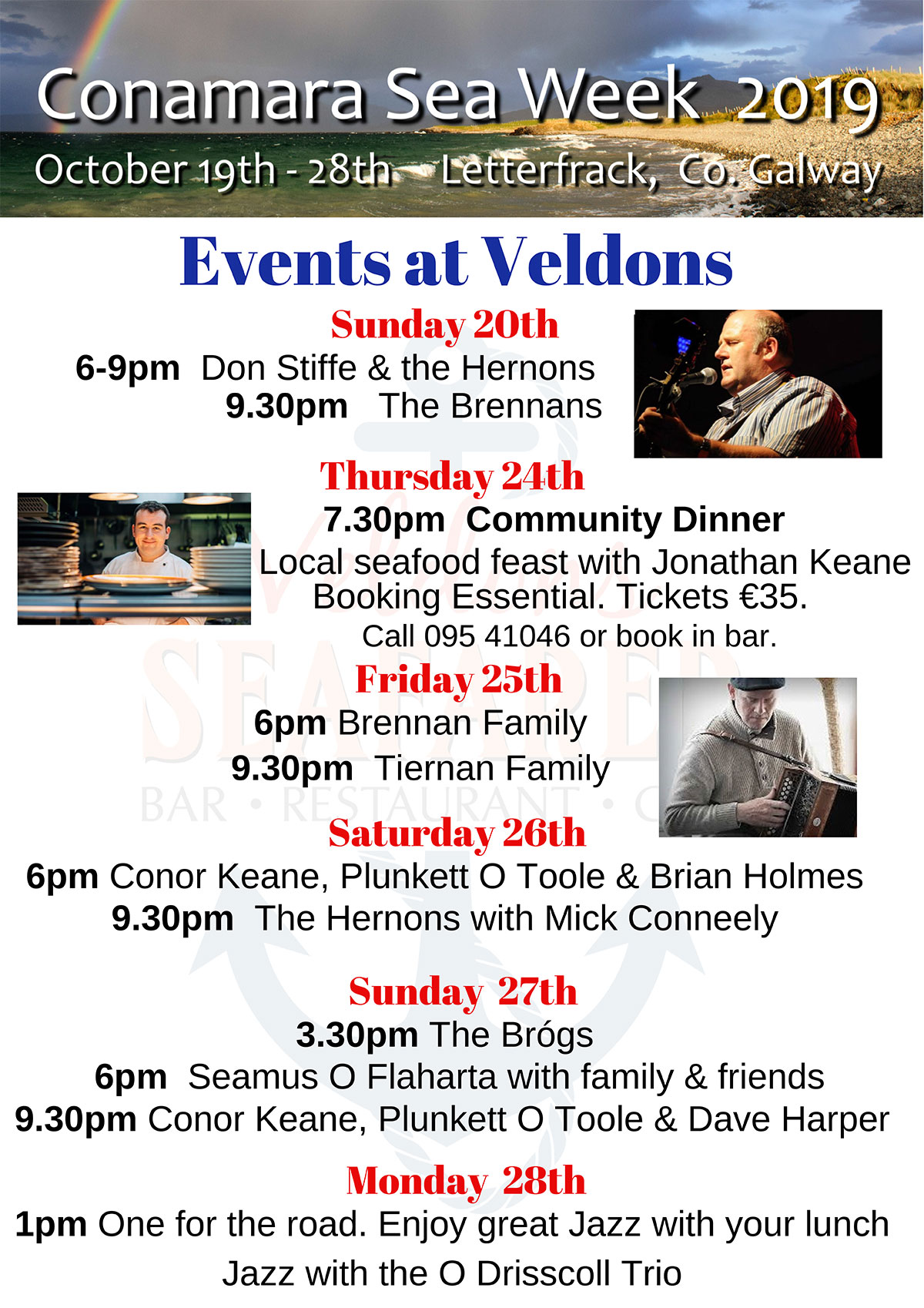 Conamara is a holiday destination.