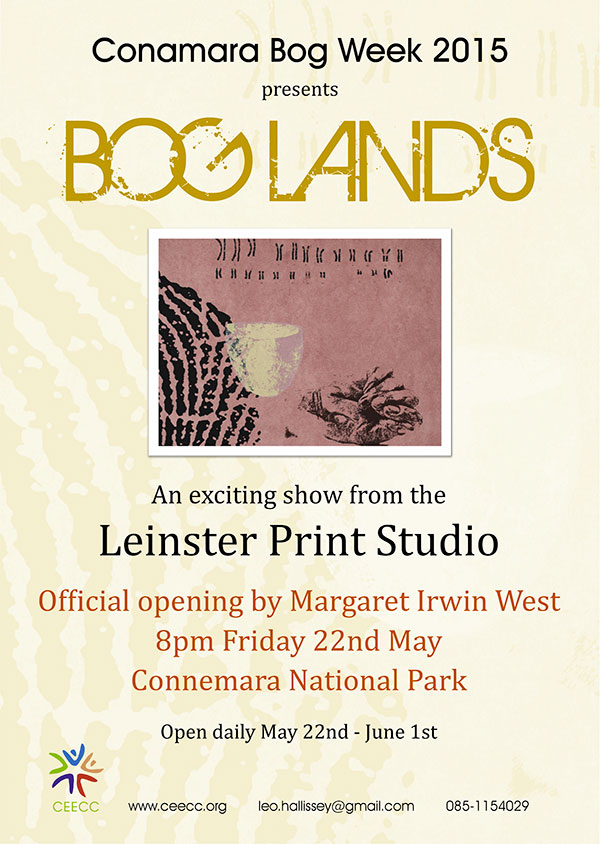 8pm Friday 22nd May in the Connemara National Park

An exciting show from the Leinster Print Studio

The Leinster Printmaking Studio (LPS) was founded in 1998 by a group of artists led by Margaret Becker, with support from the Arts Council and Kelt. Currently, it is funded by Kildare Co Council Arts Service, and the members themselves. The studio draws its members from the surrounding areas of Kildare, Wicklow, Wexford, West Dublin, Offaly, Meath and Laois.

The L.P.S. caters for anyone with an interest in printmaking. It offers facilities for producing prints in a wide variety of methods such as intaglio, aquatint, carborundum, screenprint, photo-etch and photo-lithography. It is a ‘safe’ or ‘green’ studio so, whenever possible, members strive to use safe and non-toxic materials.

Over the years the L.P.S. has established links with other printmaking workshops including Seacourt in Co. Down, Limerick Printmakers, Lorg in Galway, the Graphic Studio in Dublin and the Regional Print Centre in Wrexham, among many others.

As well as providing facilities for members the studio often invites artists to give talks and demonstrations in a variety of techniques.

Members participate regularly in National and International print exhibitions in Canada, Hong Kong, England, Spain and other European venues. “Le Chéile” was a six year project between the LPS and Wrexham Regional Print Centre in Wales. The project was the invited international touring exhibition in South Australia 2009 -11.